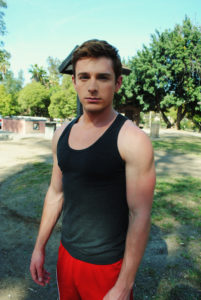 Sean Paul Lockhart has achieved fame, courted controversy, fought with producers who took advantage of him, built a business, navigated a murder investigation, been the star witness at that trial, and starred in several feature films. His fans are fiercely loyal. His detractors are equally unrelenting. Born on Halloween in 1986, he grew up in the Seattle area, where he learned to love two things: Movies and horses.

“I was always different,” Sean says, “and I’m not necessarily talking about my sexuality either. From a very young age I was mocked in school because of my near-obsession with horses.” And his move to San Diego as a teen brought him closer to his desire to be a filmmaker.

It’s his sexuality, however, that brought him the most attention. He burst onto the gay adult film scene in the guise of Brent Corrigan, a persona that electrified the fantasies of many. Popular as Corrigan quickly became, young Sean was just that — too young, at 17, an underage performer in a business that typically burned through its young models quickly.

Brent Corrigan was different. He became a commodity unsavory producers believed could be traded back and forth. He became the focus of competition and conflict that left one man dead and two in prison. Sean Lockhart, however, refused to be merely the sum of legal controversies over his underage performances and his role in a murder investigation.

“I had to weather a storm — more than one,” he says. “I was determined to emerge stronger, smarter and wanting more out of life.”

Through this period, he continued to perform as Brent Corrigan. Even in this world, he caught people’s attention, winning the industry’s greatest honors. He took the reins of his own career, spurning the control of others who didn’t put his interests first. He established his own websites, produced and directed his own adult films. With a relatively small number of appearances, he has grown one of the largest fanbases of any performer like him — 108,000 followers on Twitter, 288,000 likes on Facebook.

“I wanted people to see that I offer more than just the physical,” he says. “

On his blog, his articulate opinions and honest confessions about his difficult past, and his hopes for the future, connected with fans in a way that made them concerned less with Brent and more with the fate of Sean, a self-reliant young entrepreneur who aimed higher, for more than people told him gay adult stars were supposed to. Mainstream actor? Director? Businessman? Horseman? Author?